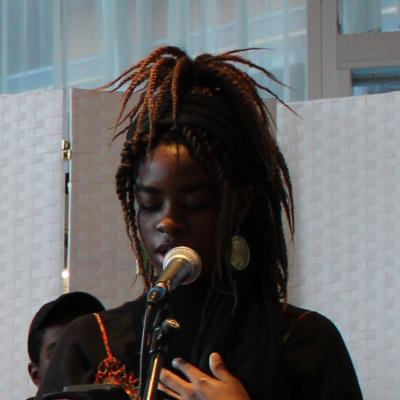 By
Monty
On December 16, the ICA hosted its third iteration of The Current, a teen-organized event and platform to showcase teen artwork and amplify youth voices through open discussion and engagement around contemporary art and current issues. The theme this round was "Nature", taking a cue from the preoccupations of the ICA's recent Mark Dion retrospective, "Misadventures of a 21st Century Naturalist".
Amireh, a member of the ICA's Teen Arts Council and the Current's main emcee, led the crowd up to the galleries and began a conversation around several pieces from the Dion show. The group shared first impressions of the pieces, observations, and reflections on the complicated relationship between humanity and the natural world. After this primer on the theme, the audience returned to the cafe for the focal point of the event.
Five ICA teens -- Dubem, Sydney, Mithsuca, Reyggie, and Be -- had each prepared work of various media -- drawing, film, sculpture, photography, and poetry -- to showcase and discuss. The work was beautiful, brave, sensitive and truthful, touching on personal struggles, connections to the natural world, and ideas of the Self. Positivity and freedom took over the room as each teen artist provided their own thoughts and inspirations and invited the audience to discuss the themes of their work. Our conversations were honest and deep, and every participant was encouraging and empathetic -- and so the conversation continued beyond The Current, beyond the ICA, into the city's snowy streets and along their diverse ways and crossings.