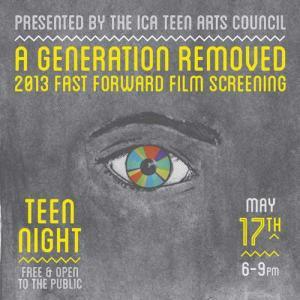 This was the Fast Forward Class of 2013's amazing video work in the form of dramas, documentaries, experiments, and animations.

A Friend Of Mine
By Aric Oak
A memory that’s not mine, and I don’t plan on having. I do miss my friend though.

SENIORITIS, THE MOVIE, THE TRAILER
By Jalen Eugene
Everybody has a point in their life where they begin to drift into the idea that it’s all pointless. This is the trailer of the documentary of the feeling of the seniors in a high school.

PUBLIC ENEMY #1
By Lauren Galloway
A biography of the most beautiful man in the world. By seeing the details of my father's everyday life we begin to understand that he is more of a father and less a public enemy.

SOLITUDE AMONGST FRIENDS
By Cedric Mendes
An indecisive teenager seeks solitude. He has two choices: drop out and play video games with his online gaming friend, or go back to school. It’s up to him to choose his true role model.

HOPELESSLY UNROMANTIC
By Alejandra Rodriguez
A study of what technology has done to romance. It contrasts two different ways of dealing with a long-distance relationship.

ONE DOES NOT SIMPLY WRITE ON MONEY
By Al Spruill
Describing the hard truth about societies relationship with money using the poem Mirror by Sylvia Plath.

THE SHINGLES
By Malcolm DC
A young man finds purpose for his dwindling relationship when he meets his girlfriend’s father, former frontman of the post-punk band, “The Shingles.”

EXPRESSION
By Noah Bartel
A closer look at the emotions revealed in every day conversation.

Within the Eyes of Beauty
By Izzy Ramirez
Beauty may be found in the strangest of places, such as the cold concrete curbs of the Boston skate scene.

Thirst of Passion
By Abraham Nyei
Experimental film about a young artist Fighting to keep his passion alive while the realities of his world fights to destroy it.

Gabby
By Natalie Barry
The story of a boy who muddles reality and the virtual world.

BOSTON 2:50 SILENCE
By Maxwell Anthony and Franklin Santiago
With pictures and videos of the place where the incident happened, the movie represents 2:50 of silence, a moment of harmony and how strong the city takes music as a way of healing to help one another.

No Me Abandones
Music Video
By Luis Garcia
A guy realizes that his relationship is coming to an end. He does what he can to keep this from happening.

Peace of Chaos
produced by the Intro to Filmmaking Class of 2013
See how two lives intersect in our pizza inspired drama.